Home Gamification, Game-based learning and Game-thinkingPlay to Learn: Breaking the Curse of Knowledge 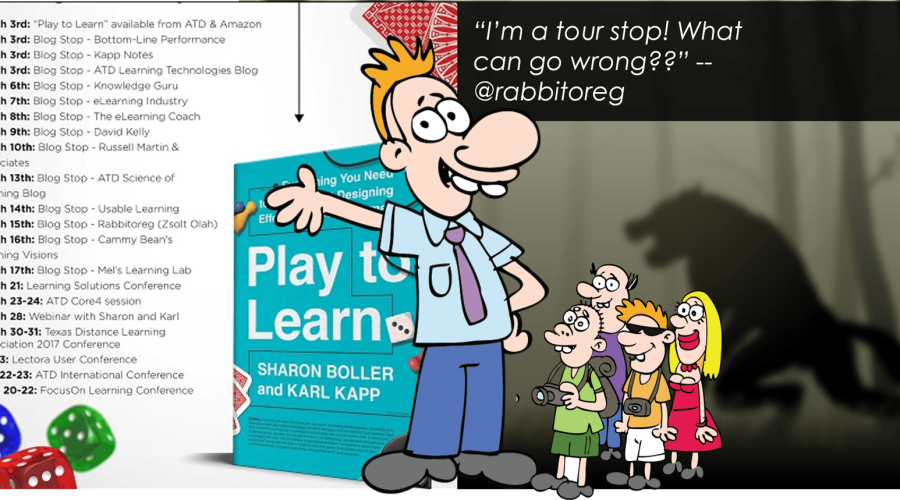 Sharon Boller and Karl Kapp have just released their book: Play to Learn. And guess what! They asked me to be a tour stop!! I’ve never been a tour stop before!! I just hope I won’t pass the curse onto them…

Chicago, IL November, 2015. A Friday afternoon, after a Play to Learn workshop, Karl Kapp and I hop into a cab to race to the airport. What we left behind for Sharon is the second biggest November snowstorm in the history of Chicago. You think it’s a coincidence?

Summer of 2014, Washington, D.C.. I’m visiting the Capitol when a powerful storm sweeps through the region with tornado-speed winds. The next day all trains are cancelled North and South.

Summer of 2015, Spain. For our ten year anniversary with my wife, we’re ready to go on a trip to Spain. Five days before the flight, a volcano starts puffing in Iceland. (Not Viceland. That’s a show on TV.) All flights are on hold. See the pattern?

Fall of 2016, Las Vegas, NV. I’m on the way to speak at DevLearn in Las Vegas, when our plane turns back midair because of a “minor mechanical” problem. This is not a coincidence. It’s a curse.

The Curse of Knowledge

While the previous examples are completely opinion-based exaggerations, the Curse of Knowledge is an actual thing.

“The curse of knowledge is a cognitive bias that occurs when an individual, communicating with other individuals, unknowingly assumes that the others have the background to understand.”

In learning design, it refers to the inability of subject matter experts to think as if they were new to the content. In Play to Learn, Sharon and Karl walk you through the proper steps of designing learning games. If you’re instructional designer, and you’re interested in learning game design, this book is a must.

I often get this question from L&D professionals at conferences:

I’m new to game design, what tool should I start out with to build games?

I would say none. Designing a learning game doesn’t start with a tool, it starts with the mind. Play to Learn is an excellent resource to take you through step-by-step of the process of designing an effective learning game. It’s filled with examples and best practices, based on the art and science of game design for L&D from two people who have street credit among curse breakers.

As for the curse of knowledge, I’d strongly recommend chapter 9 about playtesting! Playtesting is one of the most critical steps of learning game design, and probably the most tempting to be skipped under time crunch. As painful it is to see that the curse is on, the only way to break the spell is by playtesting and tweaking your design.

Five Symptoms of the Curse of Knowledge:

TIPS FOR TWEAKING: After playtesting, it’s time to tweak your design. Don’t tweak too many things at a time. Select a few elements and playtest the results. When you change too many things stranger things happen… Your game becomes a completely different animal.

Speaking of stranger things. If you feel stressed until you lay hands on the book itself, here’s a stranger things stress-reliever built in 50 minutes for you: